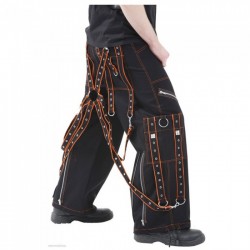 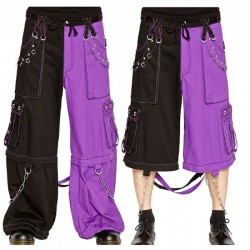 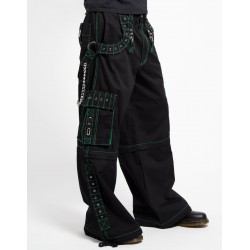 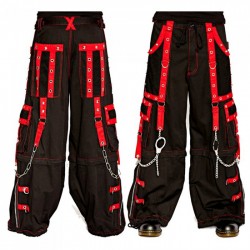 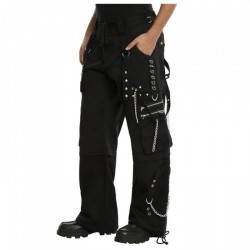 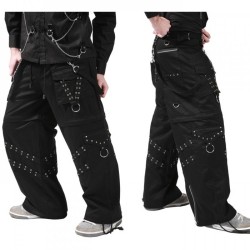 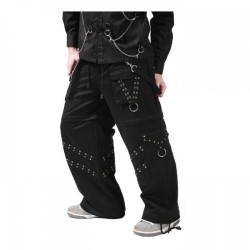 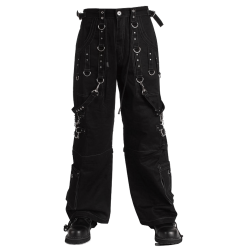 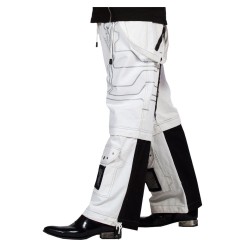 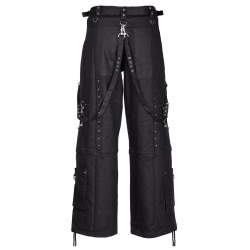 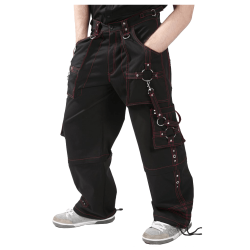 "Alternative" is a term that can be used to describe a wide range of styles and subcultures, including gothic fashion. Alternative men's gothic trousers are a type of pants that are designed to fit in with the gothic style of clothing but may have a more unique or avant-garde aesthetic than traditional gothic trousers.

These pants can be made of different materials such as leather, vinyl, or even latex, and can come in a variety of colors including black, red, white and even metallic colors. They may feature unique details such as zippers, chains, or even buckles. They can be paired with a variety of alternative gothic-style tops and accessories, such as band t-shirts, corsets, or goggles, and can be worn to create a variety of different gothic looks.

These types of pants are often worn by people who are fans of alternative subcultures or fashion that diverges from the mainstream.

Gothic fashion has been a staple of the alternative subculture for decades, and one of the most iconic elements of this style is the gothic trousers. These pants, also known as "goth pants" or "goth trousers," have a distinct look that sets them apart from traditional pants and have become a popular choice for men in the gothic community.

Gothic trousers are usually made of black or dark-colored fabric and have a slim or skinny fit. They often feature a tapered leg and a low-rise waist, which gives them a sleek, modern look. The pants are usually made of materials like leather, PVC, or denim, and may include embellishments such as studs, spikes, chains, or other hardware.

One of the most distinctive features of gothic trousers is their use of straps, buckles, and other hardware. These elements are often used to create a bondage-inspired look, and they can be found on the legs, waist, or even on the back of the pants. This gives the pants a unique and edgy look that sets them apart from traditional pants.

The gothic trousers also have a distinct silhouette, which is usually slim or skinny. This gives the pants a modern, streamlined look that is in contrast to the baggy or loose-fitting pants that were popular in the past. The slim or skinny fit also helps to accentuate the wearer's physique and gives them a more defined silhouette.

Gothic trousers are often worn with a variety of different tops, including tight-fitting t-shirts, corsets, or even vests. They are also often paired with boots or combat boots, which gives the wearer a more aggressive and edgy look. The pants can also be dressed up or down, depending on the occasion, making them a versatile addition to any wardrobe.

The origins of gothic trousers can be traced back to the gothic subculture, which emerged in the early 1980s. The goth scene was known for its dark, brooding aesthetic and influence from Gothic literature and horror films. The gothic trousers were worn by gothic musicians and fans as a form of self-expression and rebellion against mainstream fashion.

Gothic trousers have been a staple of the gothic subculture for decades, but they have also gained popularity in the mainstream fashion world. They are now worn by men of all ages and backgrounds who appreciate the unique, edgy look of the pants. The trousers can be found in many different designs, materials and cuts and can be worn as casual or formal wear.

In conclusion, gothic trousers are a distinctive and iconic element of the gothic subculture. These pants, also known as "goth pants" or "goth trousers," have a distinct look that sets them apart from traditional pants and have become a popular choice for men in the gothic community. They are usually made of black or dark